Sitting around the kitchen table, talking about our day… just had our Tyson’s (and our leftover pizza).  We have a game plan… let’s see how close we get to the plan!

Turns out it wasn’t quite at Zilker Brewery. Pro tip: compare the address on the invite to the address of the actual brewery and then re-adjust.

Now that we are here, it’s perfect. The sound is amazing. Erika and band are playing just for us, or so it feels and there’s plenty of alcohol. If only the Topo-Chico’s had followed us this morning to help temper the day. The Nine Banded Whiskey followed us and that could be a problem!

Bryan got to be a fan-boy with Erika. 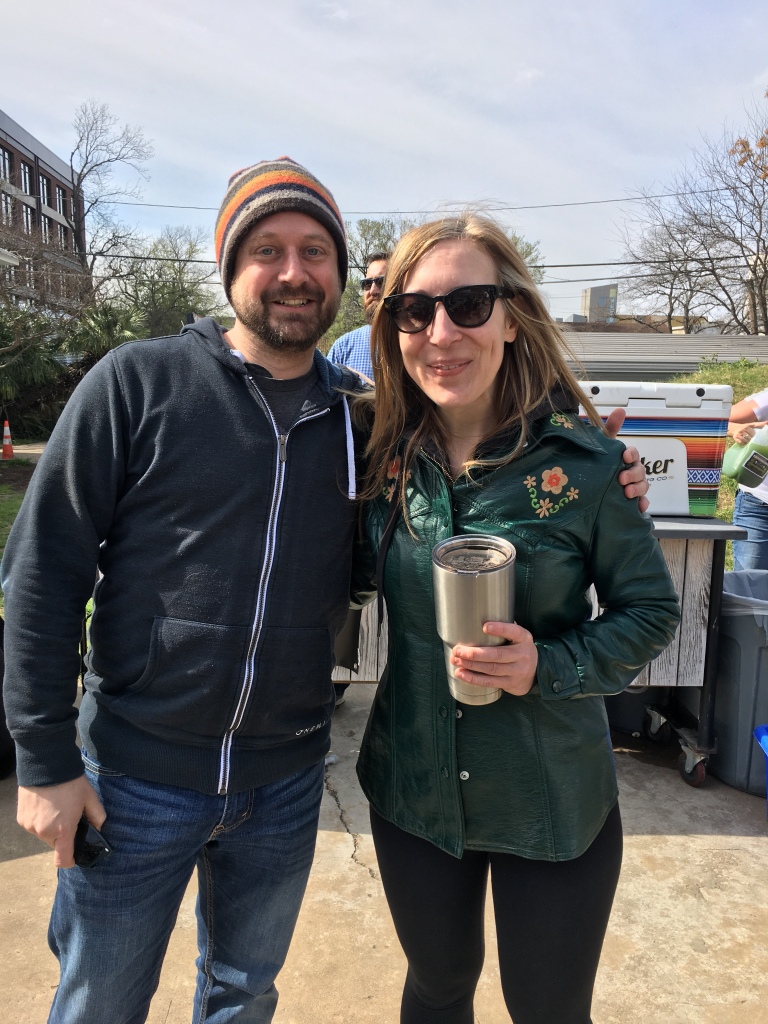 Following that is where things get dicey — surprise!  There are three bands that we want to see at 3 pm.

KOLARS is fun and we did try to go to see this show yesterday, but I don’t think we are going to make it again today. Sad face!

UPDATE: Oh, except we did! NOT!! We were too late for the performance but we did get to hug Lauren again! Also, we got to pick up the guest passes that she gave us to get into the Rachel Ray part on Saturday. Lauren is officially THE BEST!!

While we were at Little Woodruff’s, we did get to see Mystery Lights. ‘Lights’ would be the word you want to include in your band name this year or at least something that resembles light.

Hayes Carll — So want to see Hayes Carll.  Love him so much, but he’s the only one at Waterloo that I really want to see. Also…

The line-up at the Barracuda looks amazing and that’s where we’d be seeing Andrew Bird. So we’ll see where we end up for that.

The answer: The Barracuda. Cherry Glazer. The Beths. The Nude Party. Justin Townes Earle. Andrew Bird. Heart Bones. Sad to leave before Low Cut Connie, but we had a goal in mind and it included food, of the fried chicken variety. Mmmmm!

There were also two inside bands that we didn’t see, but we did walk through to get to the restrooms. One sounded fine to me (Sam Fender); the second sounded very angry (Fontaines D.C.). I don’t feel I can honestly say anything about them though; it was a short trip in and out.

UPDATE: The Current’s Day Show line-up at the Barracuda

Cherry Glazer –I wanted to like her/this band, but I couldn’t really hear her vocals and they just didn’t grab me. I went inside to try to win a trip to Bonneroo, grab some swag, give away some cards and get in position for The Beths

The Beths — This band hails from New Zealand and it was an emotional show — the morning following the New Zealand massacre. They started out with ‘Future Me Hates e’ which is the song of theirs that grabbed me months ago. There was a setlist change when lead singer, Elizabeth Stokes, got emotional trying to launch into whichever songs had been listed next. She apologized for the emotion after getting a hug from her band-mate, but there was no need; we are all human and it’s good to be reminded of our humanity in times filled with so much hate and divisiveness. I give this band a lot of credit for performing solidly albeit emotionally.

The Nude Party — This was another surprisingly fun band. Thee were some maracas; how can that not be fun? Seriously though, I thoroughly enjoyed them and they remained clothed despite their name.

Justin Townes Earle — What can I say about JTE? He wow-ed me the first time I saw him live at GAMH. I can’t even remember how long ago it was, but it was definitely before 2011 and my return to SF. I have been known to say that he isn’t as good since he got sober and while that may be true sometimes, sometimes he’s every bit as good. This for me, was one of those times. Also, he threatened someone in the audience, saying that his mother could kick the audience member’s ass. I loved his description of his mom; something about white trash. I also might have hugged him after his performance when I got to (drunkenly) tell him about my deep and abiding love for him. I wanted to offer to feed him, but I think he has someone filling that role at this stage in his life and I don’t want to interfere.

Andrew Bird — He played his flute. He whistled. He sang. He was Andrew Bird and that is why we love him!

On our way out (to head to Lucy’s for both food and music), we caught a bit of Heart Bones. I think this is a performance that you need to be able to see and I really couldn’t see.

So this is where we separate (divide and conquer) and Andee and I head to Little Woodruff’s to pick up our guest passes and the guys head to Lucy’s via Cedar Street where they stop for appetizers.

We plan to end up at Lucy’s Fried Chicken for Sweet Crude and Matthew Logan Vasquez. Achieved ✔️

We’ll update this and you can rate us on how close we stay to schedule. It’ll probably be a shitshow!

UPDATE: Andee and I hop on the bus to get to Lucy’s and arrive way before the boys. So much so that we’ve already ordered and are eating before they even arrive And the chicken there was just as good as I remembered it being last year (kinda like Tyson’s Tacos — they never disappoint!)

There’s a band on stage when we arrive, Beebe Sings Sahm. The most notable thing about them is that someone in their band stole Erika Wennerstrom’s blue suit. She definitely wore it better!

So, Sweet Crude took the stage and they rocked it. They were definitely my favorite of the day and a strong contender for the 2019 SXSW Jammies. This NOLA band is definitely a band that you’ll want to see live. They rocked my little world! I hope to see the again in the near future! My video is also sideways, so you’ll have to go to I/G to see that one too!

Matthew Logan Vasquez followed Sweet Crude and I think this was unfortunate for him and his contention as a Jammie winner because though I thought he was great (and definitely plan to see him the next time he plays SF), he could not surpass the impression that Sweet Crude had made on me!

Andee’s friend Peggy joined us and we ordered some more food and we enjoyed MLV and then we headed home! It was a long bus ride home, but it was a good day!