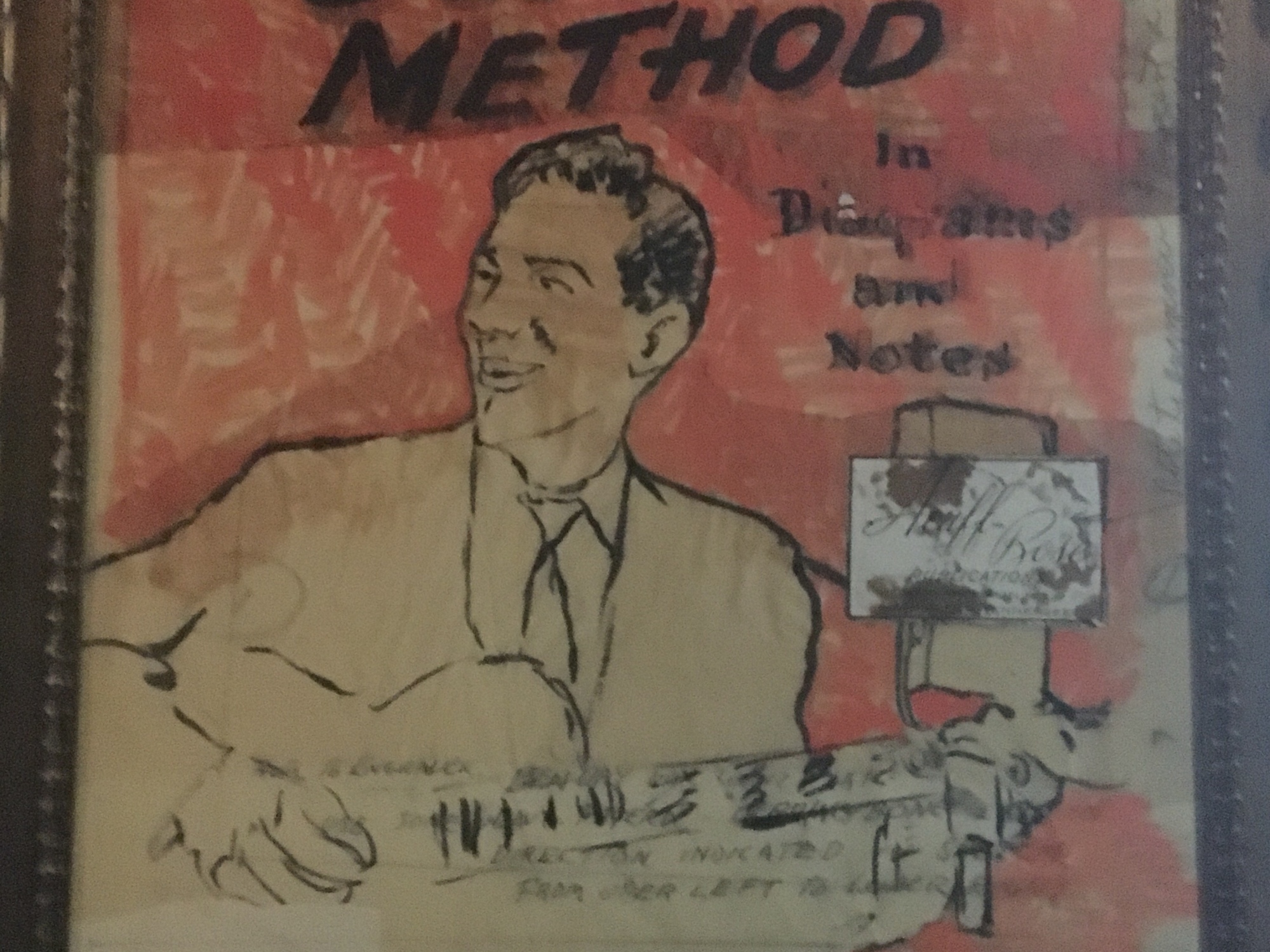 So, since we are here for more than just music, we started out with a visit to the Music Walk of Fame. Again, an awesome Lyft ride to our destination as Jeff was a fount of knowledge and gave us some great information, including the parting comment of ‘This is it; the Walk of Fame. So the question really is, what are you going to do now?’ It took less than 5 minutes to walk that walk. 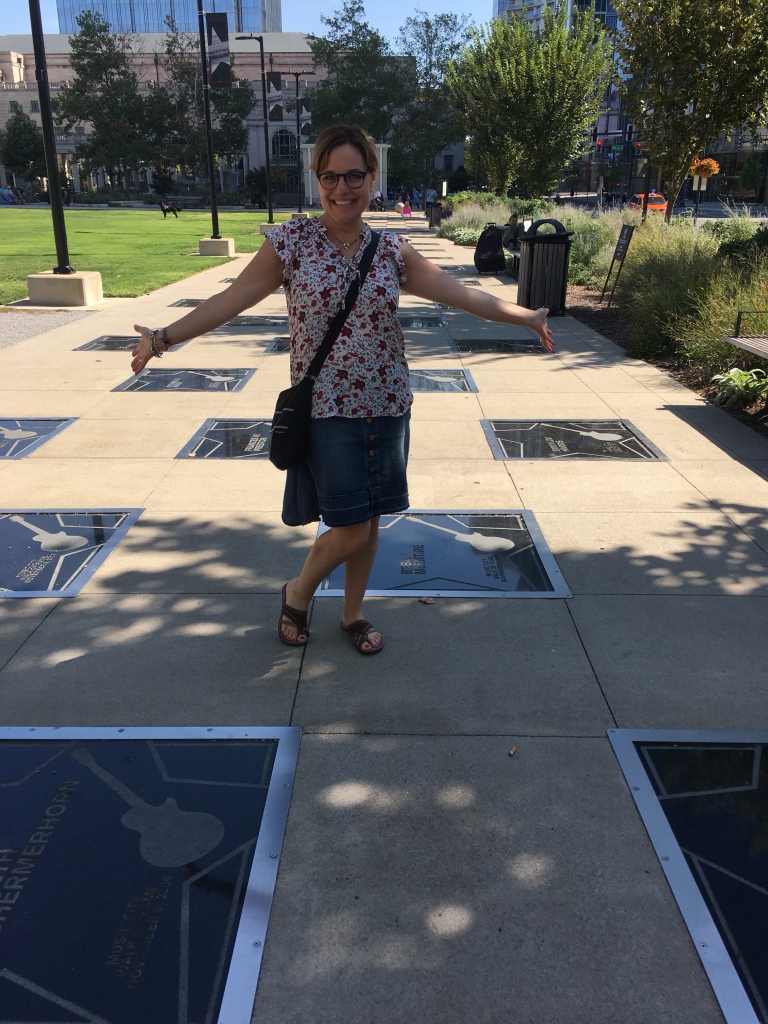 We then proceeded to spend 15 minutes walking to a place that was only a block from where we were.  Nashville is a maze (definitely not a grid) and google maps has not been kind to us here. This was particularly cruel since the SF weather that I brought with me has dissipated and we are now facing 91 degree days with humidity. 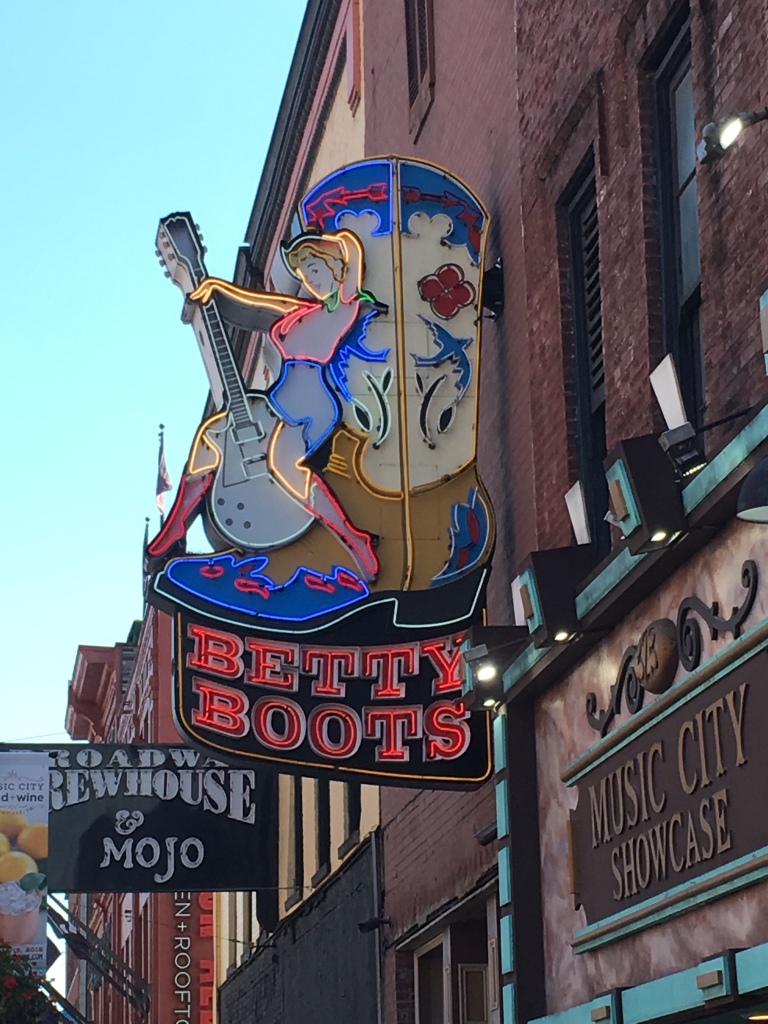 After walking the walk, we walked right into Betty Boots with the hopes of finding some boots made for walking, but sadly (or luckily) they did not have our size in the boots we selected and so we headed on to lunch at The Southern on a recommendation from our friend at Betty Boots (and to be clear, everyone in Nashville is our friend). Let’s talk about our new friends Whit and Jesse from WMOT, Nashville’s Roots Radio (89.5) because that’s our next destination.

We hopped into another Lyft after lunch and headed to The Local for more music sponsored by WMOT, NPR and WorldCafe.  Ann Powers (NPR) was there (this is exciting for me!) along with our new friends from WMOT.  We spent a few minutes chatting with our new friends from Spire. They had a mobile recording studio set up outside of The Local and they also give great food recommendations. They gave us a ‘tour’ of their mobile recording studio and of their product (a portable wireless mobile recorder) which I wanted even though I don’t make music. (Apparently they are also used for podcasts and they’re heading to Austin so be on the lookout for them Andee.) 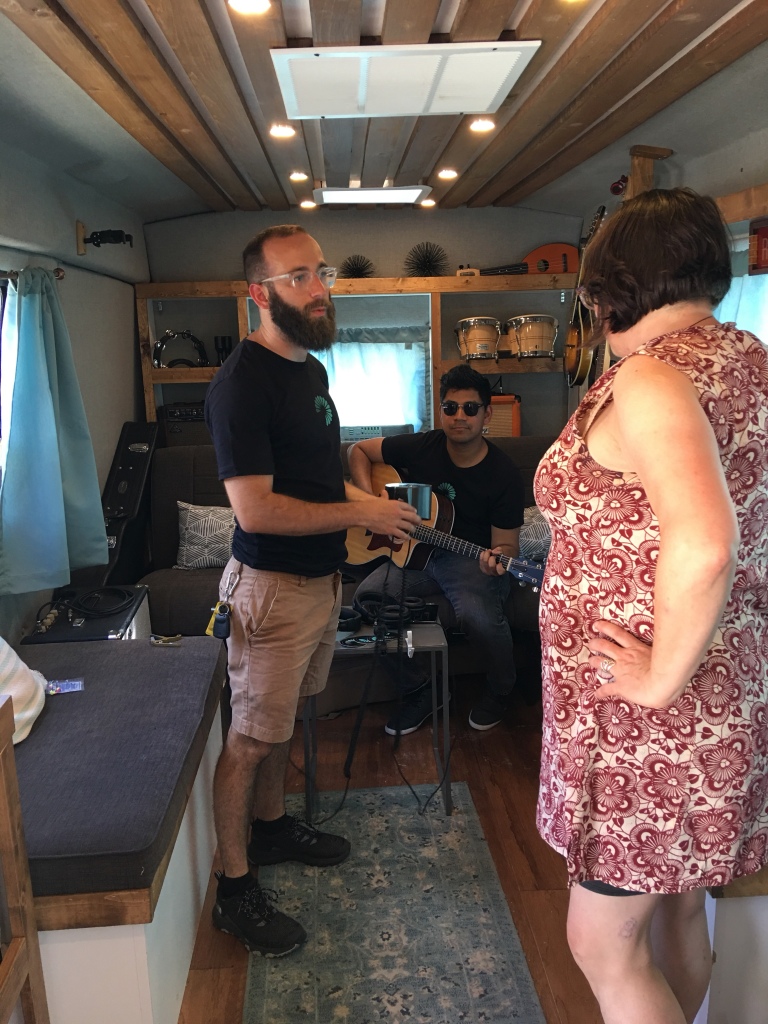 Timing is everything and we walked into The Local right before Paul Cauthen took the stage.  As Rod likes to tell me… ‘you like him’ and I do! He was great! 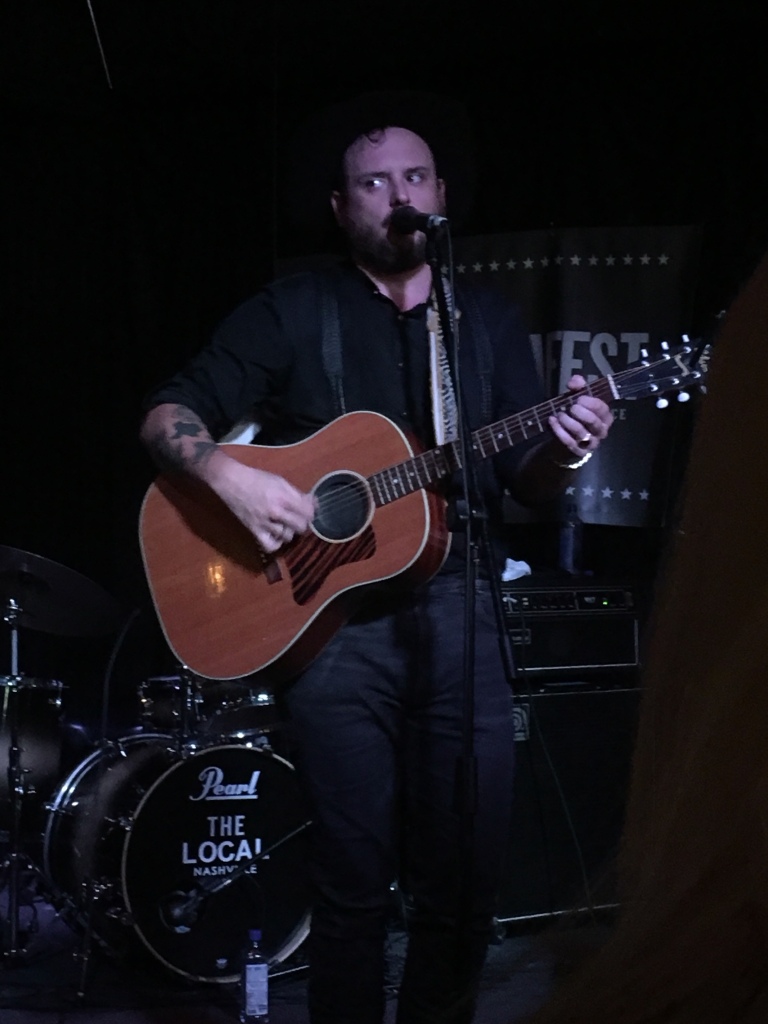 After Paul Cauthen, Sam Morrow took the stage. He was new to me (though he is from LA) and I really enjoyed him and his band.  Side note: His guitarist had the prettiest eyes that I think I’ve ever seen and I am a sucker for pretty eyes. 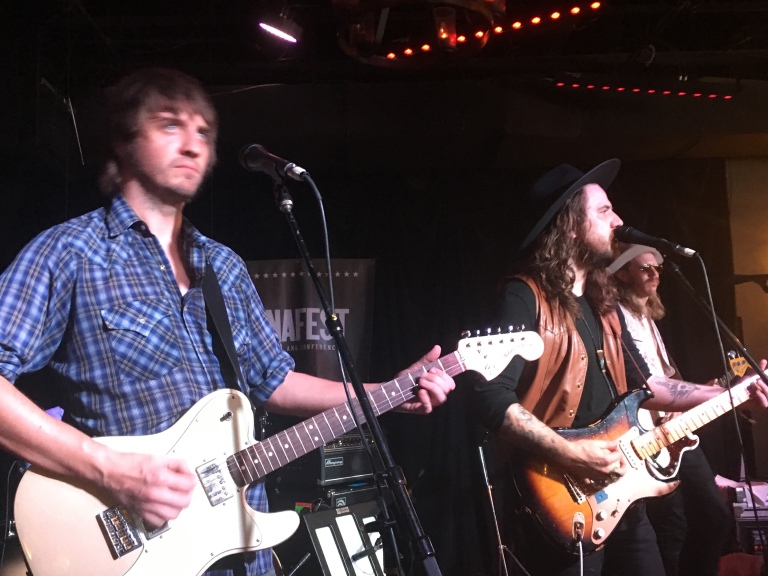 We sat outside for Earls of Leicester so we could hear a little and not see at all. This was fine as we spent most of that time trying to make a decision about later in the day. I wanted to crowdsource the decision and Andrea suggested our friend, Brian. My response — if he were here but I don’t want to start texting with him about all our choices. Seconds later, Brian (who we had not seen in the little venue at all) approaches the table! And so we start the crowdsourcing. Brian is a SF show buddy who has been to Americanafest and knows the venues (and ALL the music, I swear). Though we did not come to final decisions, we did decide to stay for Whitehorse (on the recommendation of Whit) and also for Alejandro Escovedo as I’ve never seen him live and EVERYONE said that I needed to.

Good thing we did because after the show, Dennis, the bass player from Italy, greeted me with kisses on both my cheeks. He was lovely and actually followed me out of the bar to introduce himself again. It was enough to almost make me throw out the plan that I had developed for the evening and instead head to 12th and Porter where Alejandro and his band were closing out the evening. I’ve always wanted to live in Italy! 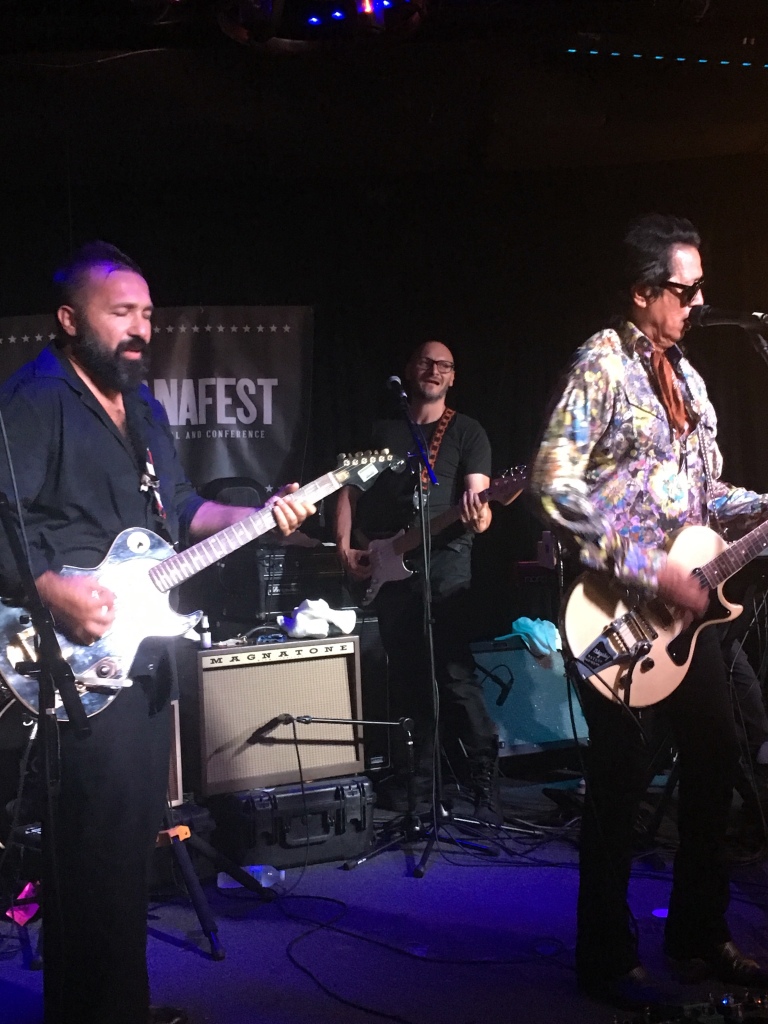 But enough about my future relocation and before I forget, we really liked Whitehorse as well. They did a great cover of ‘Nadine’. 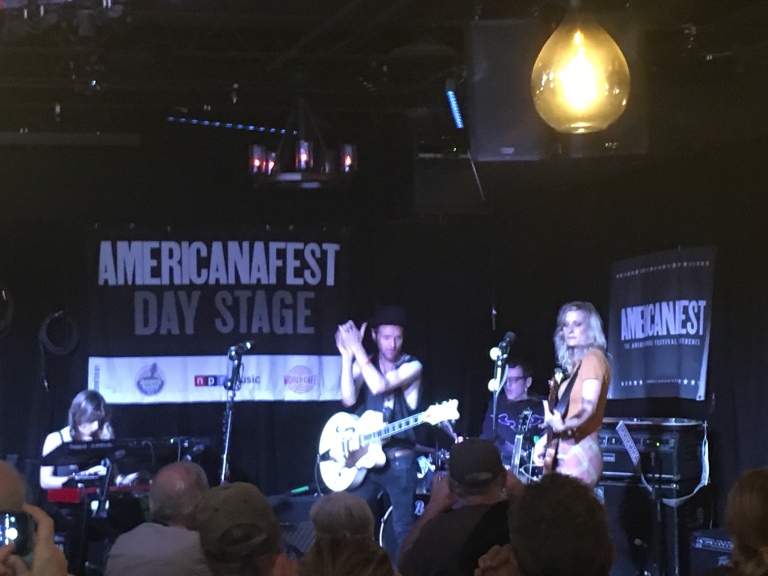 Though 12th and Porter wouldn’t have been a bad choice (as it would have been another chance to see Nicki Bluhm and also for me to see Will Hoge who I’m also told I need to see), we went with the originally developed plan of heading to East Nashville to check out a new venue and some new musicians. While listening to Alejandro, my ‘neighbor’ told me that he was heading to The Basement East to see Kelsey Waldon. The Basement East had been our choice as well because after Kelsey, Liz Brasher was taking the stage and I wanted to check her out. My new friend just reinforced my decision, so off in a Lyft we went. Because I’m as cheap as the day is long, we did a shared ride and were shortly joined by Bobby who lives in Austin and was also here for Americanafest. He was so much fun and full of knowledge; we got to compare notes, give and get recommendations and because of the timing, we also got to see a beautiful sunset over the Nashville skyline with the bridges. Oh so pretty!

Arriving at the Basement East, we got in line and got in only to find that there was no food at the bar (I swear the app said there was) though there was a food truck (selling BBQ) in the parking lot. That said, we liked the venue.

Just as we stepped away from the bar and were about to make a food plan, I recognized Ron Pope from the CCR performance the evening before and couldn’t help myself. I told him how much we enjoyed his high energy performance and then we just started talking. Andrea excused herself to get a rice bowl from the place next door (which she loved in part because they kicked her down a cup of coffee on the house, so she was fully fueled for the evening). Ron Pope also told us that he was there to see Kelsey Waldon further reinforcing our choices.

As Kelsey took the stage, I spotted our new friends, Debbie and Angie — two high school friends from Latrobe PA who were ‘reuniting at Americanafest, sitting at a table near the stage.

Kelsey was more country-ish and more than enjoyable. I’d see her again. 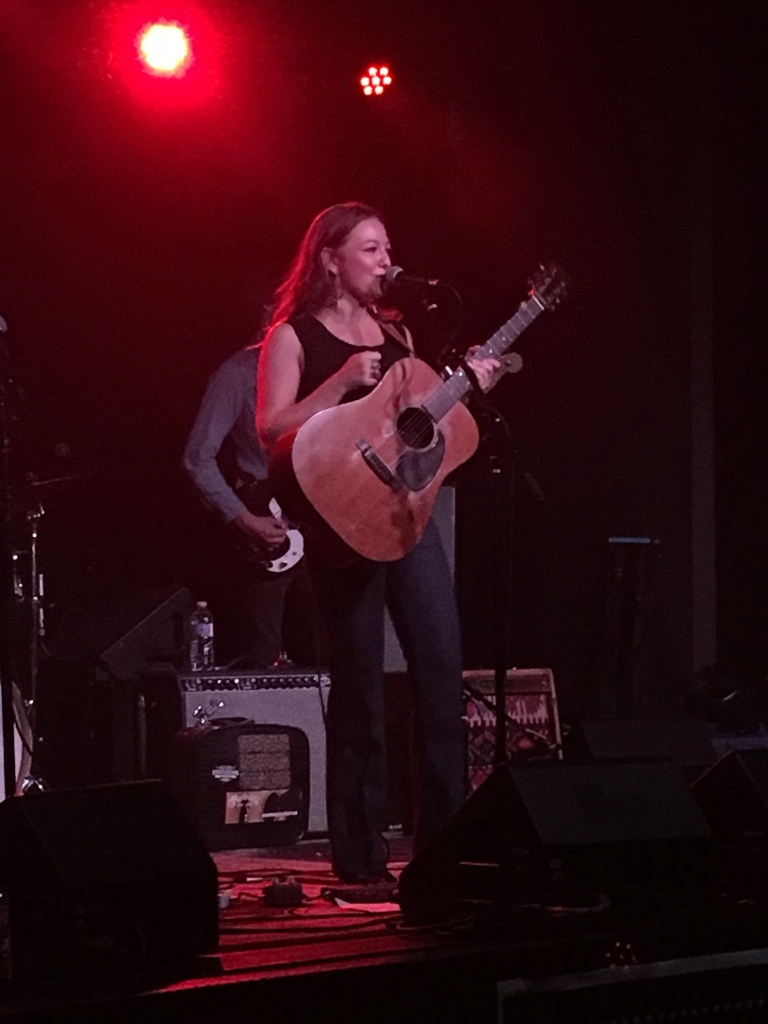 Next up was Liz Brasher and OMG! She’s amazing! The energy!!!! She was great and her bass player was also an energetic moving force. I’m so glad that we made the decision that we made. I will definitely see her again. Also, did I mention that she’s so pretty! 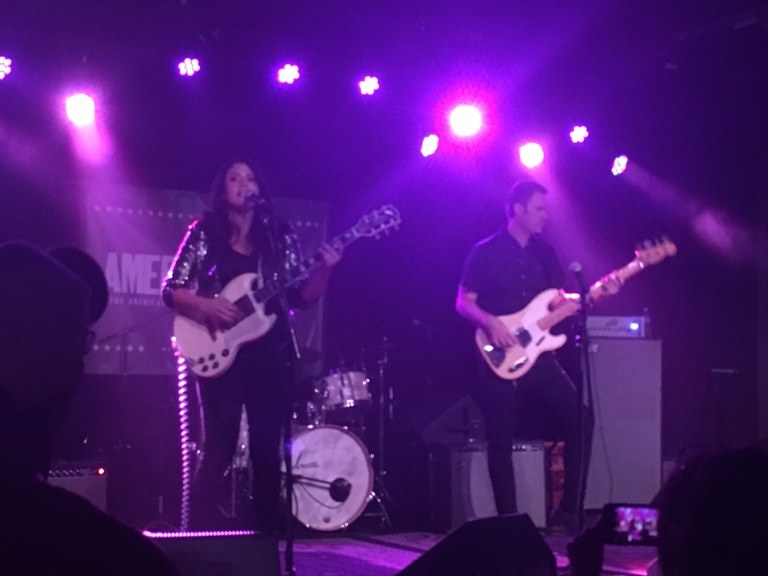 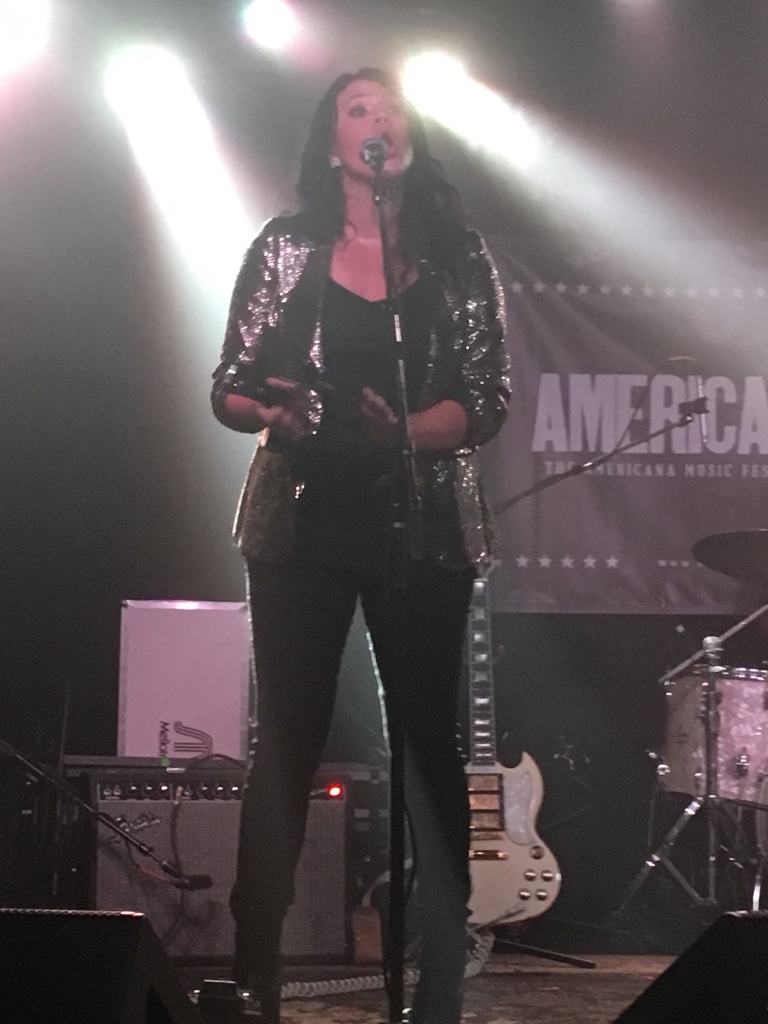 Decision time again! Do we stay for Amanda Shires or do we leave and try to catch Hayes Carll at 3rd & Lindsley (which would be another new venue for us).  Andrea made the call and we stayed to see Amanda. Another awesome choice! Though the soundcheck was a bit long, she made it fun and funny and then she really rocked it. Boy did she! She was also really funny as she introduced her last song saying that her band was already supposed to be playing across town and so this would be the last song. ‘Everything starts late in Nashville. Welcome to the shit show!’ and I felt welcomed! 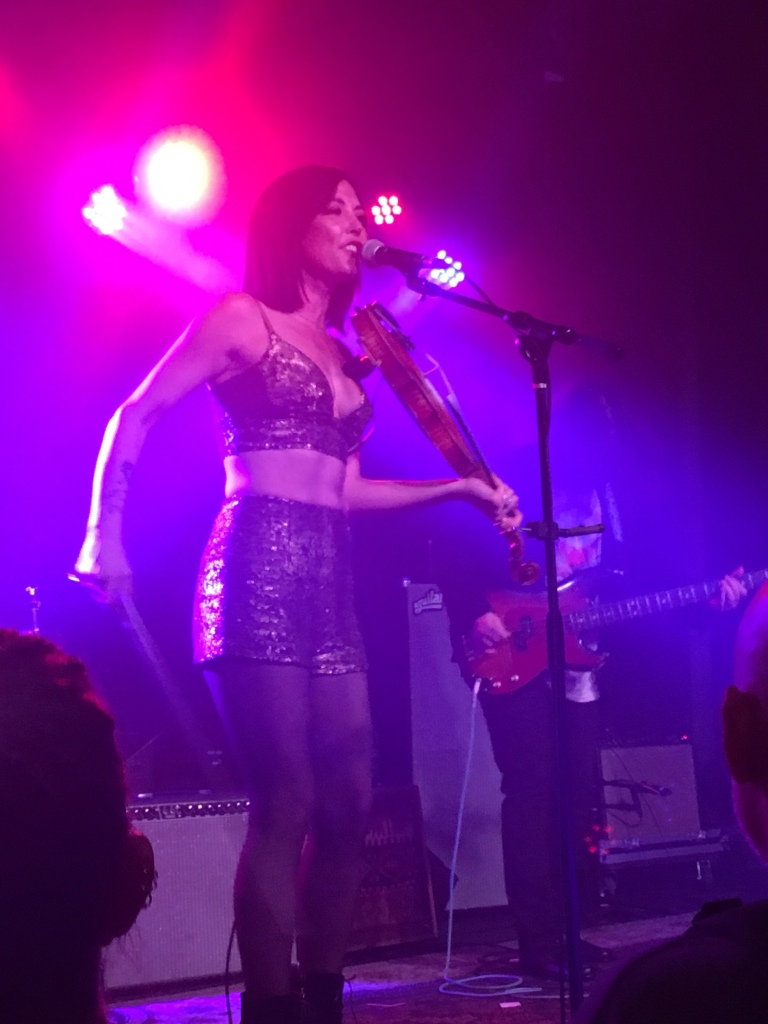 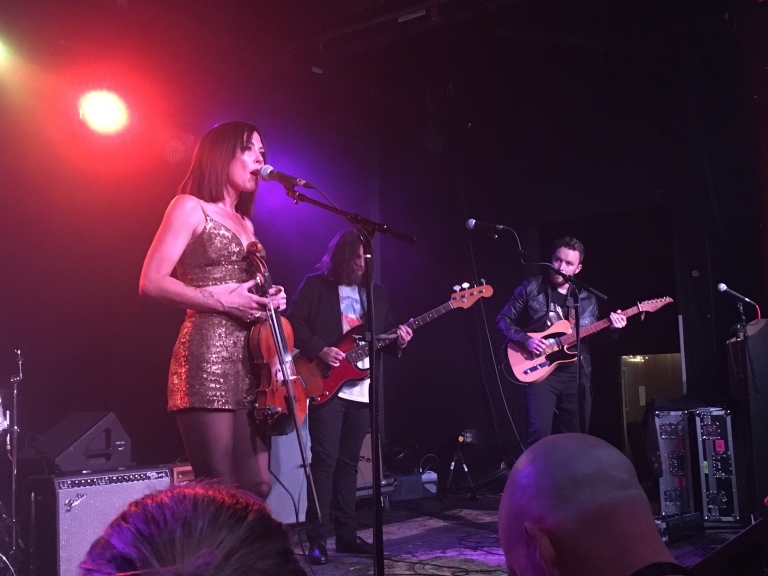 Originally the next act was supposed to be Lee Ann Womack & Friends, but it was changed (I assume thanks to Hurricane Florence) and instead John Paul White was set to perform.  We were tired and definitely tired of standing and I had just turned to Andrea to say that I was totally okay if we called it and headed home (which she was also about to say to me) when Debbie came up to tell us they were leaving and if we wanted their table… DID WE EVER!!! So once we were seated, we decided to stick around for John Paul White. I’ve never seen him with a band, so this was a different experience and he was definitely more lively than when it’s him solo, but it was still a bit too mellow for us. Though he was good, we probably only stayed for 4 – 5 songs and then it was heading home. 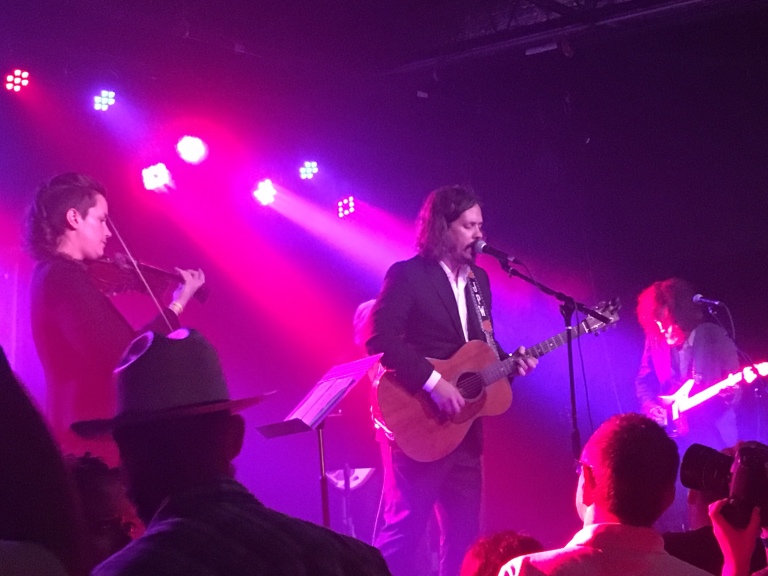 What a day! What a night!