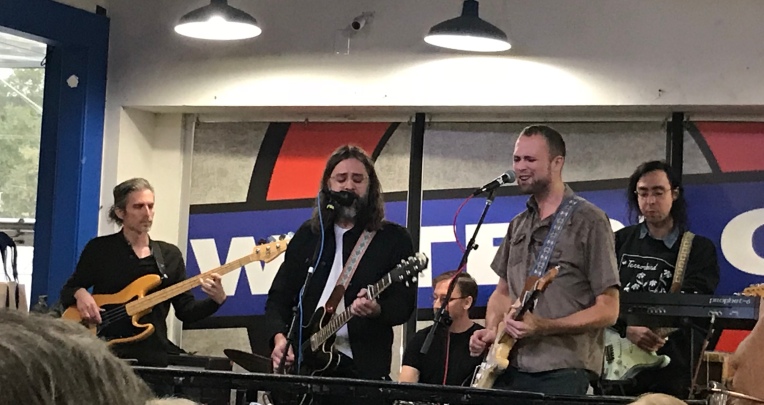 Curtis Roush, the studious looking member of the raucous Austin band, The Bright Light Social Hour has a new solo album out today. Last night I had a chance to see him perform several of his new songs at the Austin treasure, Waterloo Records. I went home with a signed LP and played it while Rob and I made dinner. He was really impressed and liked it a lot, and so do I.

It isn’t BLSH but that is a good thing. This is the kind of stuff I like to listen to all the way through on a Sunday afternoon. It is chill… a lot more chill than BLSH so be ready. Think Jim James (My Morning Jacket) meets early Local Natives and they just got stoned to talk about life.

The whole album is Curtis, playing all the music and performing vocals, but he invited a few of his BLSH bandmates and other local Austin musicians to help him perform the music live. Jack (from BLSH) and Walker Lukens, and many other Austin scensters were at the show, which ended with a heartfelt speech from Waterloo Records owner John Kunz. John talked about the Austin Record label Modern Outsider, supporting their local Austin artist, Curtis, at the local Austin Record store, Waterloo and how support of this type of network keeps the Austin music scene strong. Preach it John, preach!

Campfire Cosmic Music is out today. I know I will be listening to it around my next campfire. So far, it doesn’t appear there is a live tour planned but I’ll try to update you if something gets scheduled.

One thought on “Curtis Roush (from Bright Light Social Hour)”